This is what happens when your dog gets revenge for leaving him home when you run off to the yarn store. 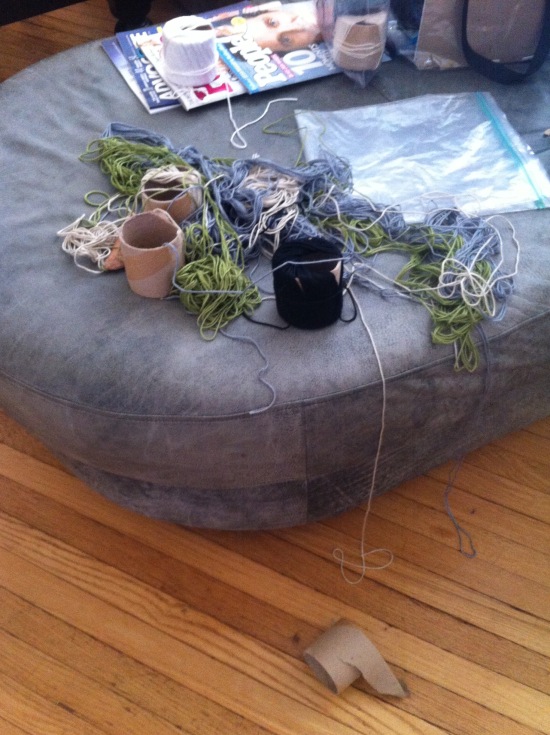 But this is what he looks like when you get home.

How can you you possibly get mad at a face like that?

Being a Texas knitter is tough. Nine months out of the year it’s either hot, very hot, or so hot I want to bathe in a bathtub of ice cubes and stay there until January. Since I like to knit with natural materials–wool, alpaca, cashmere–this means that nine months of the year I have a pile of very warm material sitting in my lap.

Ah, but it’s those other three months of the year that are glorious. Daytime temps in the 60’s or 70’s, shorts and sandals in December, and lots and lots of knitting in the evenings.

Forget the shorts and sandals this winter. It’s been COLD, like the-coldest-winter-I-can-ever-remember COLD here in Dallas. The warm little pile of wool in my lap has actually served a purpose this winter–and that’s a good thing.

After a run of chunky wool scarves and cowls, and maybe because it was a new year, I wanted to try something different. Thinking ahead to spring, I found some beautiful, shiny, soft bamboo and silk yarn that looked like it would glide right through my fingers. It did alright, but it was a shock after all the chunky wools.

I decided to start with the plum yarn. Some type of light, airy, lacy pattern called out to be knitted in this deeply beautiful color. I cast on, knit a few rows in the somewhat complicated pattern, only to get distracted by something on TV. I made a mistake. No problem, I’ll just unravel a bit and fix it.

Easier said than done. This is the first time I’ve ever knit with a bamboo/silk blend and have discovered that beauty comes at a price. Unraveling and fixing small mistakes turned out to be a painstaking endeavor since the stitches on such slippery yarn were very difficult to pick back up. If I didn’t pay attention, the stitches would disappear three rows deep. With such a complicated pattern–lots of K2togs, YOs, and K1tbls–it was impossible to not get confused.

I’m stubborn. After FIVE episodes of ripping everything out and starting all over again, I switched to an easier pattern. Lots of repetition and only two repeating rows. I do have my limits.

Just like all those old new year’s resolutions I never kept, I’m still making the same old mistakes when I knit.

That’s okay. I’m already planning my next bamboo/silk scarf in a light stone color. Now that I’m an expert with bamboo/silk yarns (ha!) maybe I’ll make it a little more complicated–and leave the TV turned off.